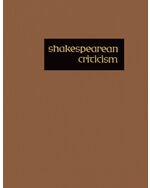 
Shakespearean Criticism: Excerpts from the Criticism of William Shakespeare's Plays & Poetry, from the First Published Appraisals to Current Evaluations