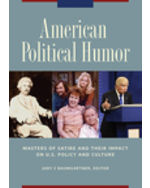 
American Political Humor: Masters of Satire and Their Impact on U.S. Policy and Culture, 1st Edition

Historically, there has been a tendency to regard political satire and humor as a sideshow to the wider world of American politics-entertaining and sometimes insightful, but ultimately only of modest interest to students and others surveying the trajectory of American politics and culture. This set documents just how mistaken that assumption is. By examining political humor and satire throughout US history, these volumes not only illustrate how expressions of political satire and humor reflect changes in American attitudes about presidents, parties, and issues but also how satirists, comedians, cartoonists, and filmmakers have helped to shape popular attitudes about landmark historical events, major American institutions and movements, and the nation's political leaders and cultural giants. Finally, this work examines how today's brand of political humor may be more influential than ever before in shaping American attitudes about the nation in which we live.