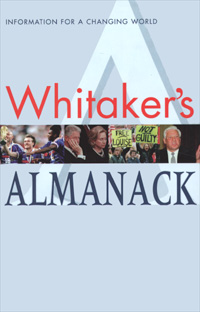 An indispensable, meticulously researched and authoritative information guide for more than 130 years, Whitaker's Almanack brings together a wider range of facts, figures and directory information than any other annual reference work. It's the essential what's what and who's who of Great Britain and the world today, providing everything a reader might conceivably wish to know in a world driven by information – no year is complete without it. New to this edition is a special supplement on the Scottish and Welsh elections.

"Essential reference for those in the United Kingdom as well as for Anglophiles the world over. Every library needing at least one single-volume definitive reference work about Great Britain should have this source on standing order." -- American Reference Books Annual 1999

"This 133d edition covers a wide range of governmental, financial, legal, and other current information specific to the United Kingdom...There is a tremendous amount of useful information in this reference tool for those who work with, or who are interested in, the United Kingdom, ranging from Buckingham Palace's Website to lists of current baronets and knights...Large public and academic libraries in the United States and libraries in Commonwealth countries will want a new edition of this work every year." -- ARBA (2002)

"No other almanac provides as much information on Great Britain as Whitaker's does." -- American Reference Books Annual

"...covers essential facts and figures on the United Kingdom and the rest of the world...order of contents was changed for this edition to make it more user-friendly..written mainly for UK readers, focusing on issues related to their country. However, it's a comprehensive reference source and will be useful at large public and academic libraries in the United States as well." --ARBA (2004)

"Whitaker's Almanack is the place for things that everybody needs but nobody publishes -- nobody else." -- London Times, UK (12/3/1999)