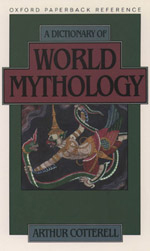 Highlights the chief myths of the world in seven main sections--West Asia, South and Central Asia, East Asia, Europe, Africa, America, and Oceania. Presents the powerful gods of Greece, Rome, and Scandinavia, the more mystical deities of Buddhist and Hindu India, and the stern spirits of the African and American continents. Drawing upon hundreds of myths from around the globe, it not only reveals the vast differences in these civilizations, but also demonstrates the unity of mankind in its fundamental need for explanations of the unknown