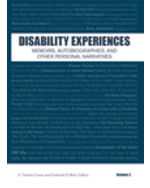 Disability Experience: Memoirs, Autobiographies, and Other Personal Narratives presents essays on 200 narrative works written by persons with disabilities. The disabilities covered are mostly physical, but psychological/psychiatric conditions, developmental/intellectual impairments, and addiction are also included. While most are written by disabled persons themselves, a small number of biographies and family memoirs (such as those written by parents or spouses) were included when the advisory board felt they were important contributions to communicating the disability experience.

The works date from as early as 1470 to as recent as 2018. While most of the authors are from the US, one-third of the works are by authors from elsewhere around the globe. Care was also given to represent a wide range of other cultures, heritage, and lifestyles, in areas such as religion, sexual orientation, gender identification, color, and other factors that, along with disability, constitute intersectional experiences. At least half the works included represent such at least one diversity factor.

All entries are signed, and each begins with a brief summary of the work and list of key information. The body of each essay provides an overview of the work and the subject’s life, and discussion of historical and cultural context, themes, and critical reception. All essays have one or two sidebars and a bibliography; half also have a photo.

The work includes a pedagogical piece from the editor that discusses ways the contents can be used in the classroom. This is followed by a three-part thematic outline organizing the entries by disabilities and conditions that are represented in the works; by formats other than autobiography or memoir, such as graphic memoir or poetry; and by other themes, both disability-related and other.

The volume also includes a subject index and a list of other recommended memoirs and anthologies not covered within. 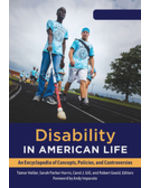 Disability in American Life: An Encyclopedia of Concepts, Policies, and Controversies 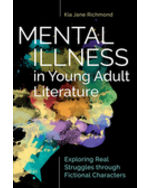 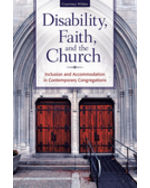 Disability, Faith, and the Church: Inclusion and Accommodation in Contemporary Congregations 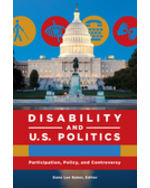 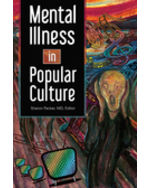