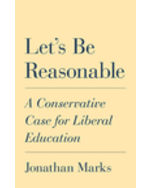 This book outlines a conservative college professor's compelling defense of liberal education. Not so long ago, conservative intellectuals such as William F. Buckley Jr. believed universities were worth fighting for. Today, conservatives seem more inclined to burn them down. In this title, a conservative political theorist and professor finds in liberal education an antidote to this despair, arguing that the true purpose of college is to encourage people to be reasonable—and revealing why the health of our democracy is at stake. Drawing on the ideas of John Locke and other thinkers, the author presents the case for why, now more than ever, conservatives must not give up on higher education. He recognizes that professors and administrators frequently adopt the language and priorities of the left, but he explains why conservative nightmare visions of liberal persecution and indoctrination bear little resemblance to what actually goes on in college classrooms. He examines why advocates for liberal education struggle to offer a coherent defense of themselves against their conservative critics, and demonstrates why such a defense must rest on the cultivation of reason and of pride in being reasonable. More than just a campus battlefield guide, this volume recovers what is truly liberal about liberal education—the ability to reason for oneself and with others—and shows why the liberally educated person considers reason to be more than just a tool for scoring political points.