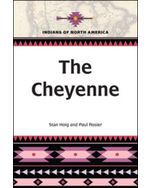 The Cheyenne, part of the Indians of North America series, presents a fascinating portrayal of the history and culture of these native people. Like the Teton Sioux, the Cheyenne originally resided in Minnesota but settled in North and South Dakota in the 18th century. They eventually split into two divisions—Northern and Southern—that were separated by the Arkansas River. As with many Plains Indians, the Sun Dance, which called for a renewal of the natural world, played an integral role in Cheyenne society.