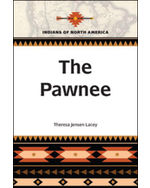 The Pawnee, part of the Indians of North America series, presents a fascinating portrayal of the history and culture of these native people. The Pawnee originally called Kansas and Nebraska home and consist of four autonomous bands: the Chaui, Pitahawirata, Kitkahahki, and Skiri. They are well known for serving as scouts for the U.S. Army in helping to track down their longtime enemies, the Cheyenne and Sioux, during the Indian wars of the 1870s and '80s—a role that was portrayed in the 1990 movie Dances with Wolves.