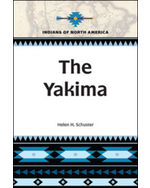 The Yakima, part of the Indians of North America series presents a fascinating portrayal of the history and culture of these native people. The Yakima and their ancestors have lived on the Columbia Plateau in what is now Washington State for more than 12,000 years. The tribe's first direct contact with non-Indians came when Lewis and Clark explored their lands in 1805, and Yakima country became part of Washington Territory in 1853. Territorial governor Isaac I. Stevens coerced the tribe's representatives to sign a treaty in which they ceded one-fourth of the land in present-day Washington, retaining only a small reservation. As white settlers overran the ceded area, hostilities escalated into the Yakima War, which ended with the Indians' surrender to the U.S. Army in 1858. In more recent years, the Yakima have battled in court for recognition of their treaty rights and have worked hard to maintain their traditions.