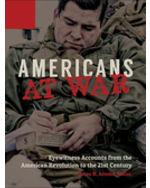 Americans at War: Eyewitness Accounts from the American Revolution to the 21st Century, 1st Edition

Understanding primary sources is essential to understanding warfare. This outstanding collection provides a diverse set of eyewitness accounts of Americans in combat throughout U.S. history. Offering riveting true stories, it includes accounts from participants in the American Revolution, the War of 1812, the Indian Wars, the Mexican-American War, the Civil War, the Spanish American War and Philippine Insurrection, World War I, World War II, the Korean War, the Vietnam War, The Persian Gulf War, the Afghanistan War, and the Iraq War. Most eyewitness accounts of war currently available to the public are those of writers who enjoy higher military rank. This book addresses this imbalance between officers' and enlisted men's accounts by invoking oral history archives. Contextual essays and timelines allow the reader to place the accounts in time and place, while the entries themselves allow the reader to experience the thoughts and emotions of Americans who engaged in combat.