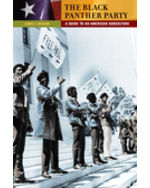 Black Panther Party, The: A Guide to an American Subculture, 1st Edition

In a time when direct, nonviolent protest was seen as the most effective way to fight for racial justice, the Black Panthers' confrontational style and critiques of local law enforcement throughout the nation defied both civil rights orthodoxy and white authority. This title situates the Black Panther Party within the shifting political terrain of the African American freedom struggle of the late 1960s and early 1970s. In an era when African Americans were assumed to have secured their basic constitutional rights, the Black Panther Party stood firm that despite the gains of the Civil Rights Movement, social, economic, and political equality had not been achieved for many African Americans, and more needed to be done. Organized geographically, the book examines Black Panther Party chapters and affiliates throughout the United States. It covers the Panthers' most important developments and challenges, with focus on local realities as they varied throughout the nation.