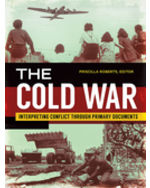 One of the most extensive to date, this set of primary source documents studies the Cold War comprehensively from its beginning, with the emergence of the world's first communist government in Russia in late 1917, to its end, in 1991. All of the key events, including the Berlin Blockade, the Korean War, the Cuban Missile Crisis, the Vietnam War, and the nuclear arms race, are discussed in detail. The primary sources provide insight into the thinking of all participants, drawing on Western, Soviet, Asian, and Latin American perspectives. In The Cold War: Interpreting Conflict through Primary Documents, primary documents are organized chronologically, allowing readers to appreciate the ramifications of the Cold War within a clear time frame. Extensive interpretive commentary provides in-depth background and context for each document. This work is an indispensable reference for all readers seeking to become deeply knowledgeable about the Cold War.