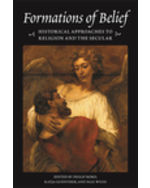 Formations of Belief: Historical Approaches to Religion and the Secular, 1st Edition

For decades, scholars and public intellectuals have been predicting the demise of religion in the face of secularization. Yet religion is undergoing an unprecedented resurgence in modern life—and secularization no longer appears inevitable. This title brings together many of today's leading historians to shed critical light on secularism's origins, its present crisis, and whether it is as antithetical to religion as it is so often made out to be. It offers a more nuanced understanding of the origins of secularist thought, demonstrating how Reformed Christianity and the Enlightenment were not the sole vessels of a worldview based on rationalism and individual autonomy. Taking readers from late antiquity to the contemporary era, the contributors show how secularism can be a form of belief and yet how its crisis today has been brought on by its apparent incapacity to satisfy people's spiritual needs. Explores regional secularism and religion, the neuroscience of religion, and more.

Front Cover.
Half Title Page.
Other Frontmatter.
Title Page.
Copyright Page.
Contents.
Acknowledgments.
Formations of Belief.
Introduction.
Religious Pluralism and the Origins of the Secular.
1: Past Belief: The Fall and Rise of Ecclesiastical History in Early Modern Europe.
2: Jacob Sasportas and Jewish Messianism.
3: Doubt and Unbelief in the Early Modern Era: Diego Hurtado de Mendoza and the Spanish Tradition.
4: Exeuntes de Corpore Qui Sumus? “Out of the Body, Who Are We?” Augustine, the Care of the Dead, and a Clash of Representations.
5: In the Church and at Home: Approaches to Saints in Colonial Mexico.
Secularism and Its Discontents.
6: An Ordinary Soviet Death: Scientific Atheism, Socialist Rituals, and Life's Final Question.
7: True Believers in the Modern Middle East.
8: The Reformation Era and the Secularization of Knowledge.
9: Contesting Secularization: The Idea of a Normative Deficit of Modernity after Max Weber.
10: Religious Minorities and the Anxieties of an Islamic Identity in Pakistan.
Afterword: Belief in Science? On the Neuroscience of Religion.
Notes.
List of Contributors.
Index.
A Note on the Type.