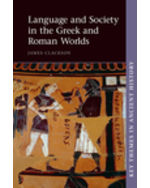 Language and Society in the Greek and Roman Worlds, 1st Edition

Texts written in Latin, Greek and other languages provide ancient historians with their primary evidence, but the role of language as a source for understanding the ancient world is often overlooked. Language played a key role in state-formation and the spread of Christianity, the construction of ethnicity, and negotiating positions of social status and group membership. Language could reinforce social norms and shed light on taboos. This book presents an accessible account of ways in which linguistic evidence can illuminate topics such as imperialism, ethnicity, social mobility, religion, gender and sexuality in the ancient world, without assuming the reader has any knowledge of Greek or Latin, or of linguistic jargon. It describes the rise of Greek and Latin at the expense of other languages spoken around the Mediterranean and details the social meanings of different styles, and the attitudes of ancient speakers towards linguistic differences.