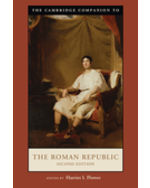 The Cambridge Companion to the Roman Republic, 2nd Edition

This book examines all aspects of Roman history and civilization from 509 to 49 BC. The key development of the republican period was Rome's rise from a small city to a wealthy metropolis, which served as the international capital of an extensive Mediterranean empire. These centuries produced a classic republican political culture, closely associated with the growth of a world empire. They also witnessed the slow disintegration of republican government under the relentless and combined pressure of external commitments, growing internal dissension, and the boundless ambition of successful military leaders. In the second edition of this Companion volume, distinguished European, Canadian, and American scholars present a variety of lively current approaches to understanding the political, military, and social aspects of Roman history, as well as its literary and visual culture. The second edition includes a new introduction, three new chapters on population, slavery, and the rise of empire, and updated bibliographies and maps.