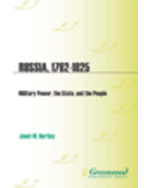 A study of the Russian Empire at the peak of its military power and success (1762-1825), this important book examines how a country with none of the obvious trappings of modernization was able to significantly expand its territory. Russia's military and naval victories culminated in the triumphal entrance of Russian forces into Paris in 1814 in celebration of the defeat of Napoleon. Hartley's treatment is wide-ranging and discusses many aspects of the nature of the Russian state and society, including such issues as: recruitment; institutional, legal, and fiscal structures of the state; the unique nature of Russian industrialization and social organization at the urban and village level; as well as the impact on cultural life. She covers the reign of two of Russia's most prominent rulers: Catherine II (1762-1796) and Alexander I (1801-25).

How could a country lacking modernized structures — political, institutional, social, fiscal, economic, industrial, and cultural — sustain this level of military effort and support the largest standing army in Europe? What impact did the strain of this commitment of men and money, including the invasion of 1812, have on the state and society — particularly on those who were either conscripted or the dependents they left behind? Despite the success of the Russian state, by 1825 the strains would become almost unsustainable.

Front Cover.
Half Title Page.
Title Page.
Copyright Page.
Dedication.
Contents.
Acknowledgments.
Introduction: Russia at War, 1762–1825.
1: The Military Estate: Size and Deployment.
2: The Lower Ranks: Conscription and Community.
3: The Officer Corps: Service and Challenge to the State.
4: The Cost: Expenditure and Income.
5: The Cost: Agriculture, Industry, and Trade.
6: The Impact: Conflict with Civilians in Peace and War.
7: The State: Administration, Law, and Magic.
8: The Expansion of the State: Conflict, Assimilation, and Identity.
9: Rulers and Armies: Warfare, Image, Culture, and Identity.
10: The Military Colonies.
11: Conclusion: Militarization and Modernization?.
Abbreviations.
Notes.
Glossary.
Bibliography.
Index.
About the Author.
12: Recent Titles in Studies in Military History and International Affairs Jeremy Black, Series Editor.