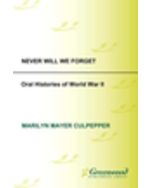 Never Will We Forget deals with the most enduring and moving side of World War II, the personal side. These are the stories of some 400 men and women, who, though they experienced the war in wildly different ways, were all profoundly affected by it. Gleaned from interviews and oral histories, the book reflects the experiences of: male and female veterans; civilians on the home front; conscientious objectors; survivors of the torpedoing of the USS Indianapolis and of typhoons; and participants in the Normandy Invasion, the Battle of the Bulge, Iwo Jima, and Okinawa. Some stories tug at the heart, some foster the shock of surprise, still others reflect the long-held pride in the American war effort at home and abroad. From the first dark stirrings of war through its dusty aftermath, Never Will We Forget captures how Americans lived, felt and believed during the twentieth century's most brutal conflict.

Front Cover.
Half Title Page.
Otherfrontmatter.
Title Page.
Copyright Page.
Dedication.
Contents.
Introduction.
1: And the War Came.
2: Women Serving in the Armed Services and with the Red Cross.
3: Normandy: “Operation Overlord”.
4: Europe.
5: The Pacific Scene.
6: Tragedy at Sea.
7: German POW Camps.
8: Liberation.
9: Japanese POW Camps.
10: Luck, Fate, Providence, and Guardian Angels.
11: The Softer Side of War.
12: The Lighter Side of War.
13: The Home Front.
14: The Home Front: The Good and the Sad.
15: The Atom Bomb and V-J Day.
16: Home at Last.
17: The Aftermath of War.
18: The Later Years.
19: A Collage of Memories.
Epilogue.
Abbreviations.
Notes.
Selected Bibliography.
Index.
About the Author.