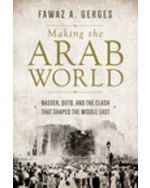 Making the Arab World: Nasser, Qutb, and the Clash That Shaped the Middle East, 1st Edition

This title discusses how the conflict between political Islamists and secular-leaning nationalists has shaped the history of the modern Middle East. In 2013, just two years after the popular overthrow of Hosni Mubarak, the Egyptian military ousted the country’s first democratically elected president—Mohamed Morsi of the Muslim Brotherhood—and subsequently led a brutal repression of the Islamist group. These bloody events echoed an older rift in Egypt and the Middle East: the splitting of nationalists and Islamists during the rule of Egyptian president and Arab nationalist leader Gamal Abdel Nasser. The author tells how the clash between pan-Arab nationalism and pan-Islamism has shaped the history of the region from the 1920s to the present. Based on a decade of research, including in-depth interviews with many leading figures in the story, the book is essential for understanding the roots of the turmoil engulfing the Middle East, from civil wars to the rise of Al-Qaeda and ISIS.

Front Cover.
Half Title Page.
Title Page.
Copyright Page.
Dedication.
Contents.
Preface.
Introduction.
1: Egypt's “Liberal Age”.
2: The Anti-colonial Struggle and the Dawn of Underground Politics.
3: The Free Officers and the Ikhwan.
4: The Birth of the Deep State and Modern Radical Islamism.
5: Young Gamal Abdel Nasser.
6: Young Sayyid Qutb.
7: The Lion of the Arabs.
8: The Accidental Islamist?.
9: Qutb's al-Tanzim al-Sirri.
10: The Decline of the Nasserist Project.
11: Sadat's Coup and the Islamist Revival.
12: The Mubarak Era: Keeping the Ikhwan in the Freezer.
Conclusion.
Notes.
Index.