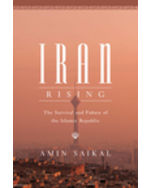 Iran Rising: The Survival and Future of the Islamic Republic, 1st Edition

Forty years after the 1978–79 Iranian revolution, this book offers a definitive political picture of the Islamic Republic. When Iranians overthrew their monarchy, rejecting a pro-Western shah in favor of an Islamic regime, many predicted that turmoil would paralyze the country for decades. Yet forty years later, Iran has emerged as a critical player in the Middle East and the world, as demonstrated in part by the 2015 international nuclear agreement. This book, by a renowned Iran specialist, describes how the country has managed to survive despite ongoing domestic struggles, Western sanctions, and countless other serious challenges. Iran’s accomplishments have cost its people, who are desperately pressuring ruling clerics for economic and social reforms, which in turn could influence foreign policy. Amid heightened global anxiety over alliances, terrorism, and nuclear threats, the book offers essential reading for understanding a country that, more than ever, is a force to watch.