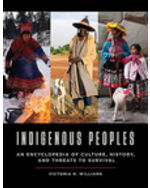 
Indigenous Peoples: An Encyclopedia of Culture, History, and Threats to Survival, 1st Edition

Perfect for readers looking to learn more about cultural groups around the world, this four-volume work examines approximately 400 indigenous groups around the world. It investigates the history, social structure, and culture of peoples from all corners of the world, including their role in the world, their politics, and their customs and traditions. Alphabetically arranged entries focus on groups living in all world regions, some of which are well-known with large populations, and others that are lesser-known and smaller. Entries include sections on the group's geography and environment; history and politics; society, culture, and tradition; access to healthcare and education; threats to survival; and See Also cross-references and a list of Further Readings resources. Includes Native Voices inset boxes, allowing readers a glimpse into the daily lives of members of indigenous groups, and an appendix featuring the United Nations Declaration on the Rights of Indigenous Peoples.