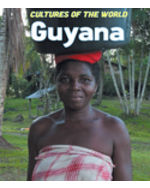 Guyana is a nation in South America. Its indigenous roots have been influenced by centuries of Dutch and British colonial control. Today, it is an independent member of the British Commonwealth, with its own unique flavor. This book dives into Guyana's rich history and studies its heritage, culture, traditions, government, economy, and religious practices, ultimately creating a complete understanding of the nation in the twenty-first century.