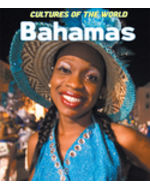 For centuries, the Bahamas was under colonial rule. As such, today the country still has a strong European influence on its traditions, culture, and celebrations. However, it also has a distinct island identity that citizens share every year with the thousands of tourists that flock to it. This book examines the distant past of the Bahamas and the nation's buildup to independence from Britain in 1973. It explores the country today, especially its foods, beliefs, economy, government, and unique festivities. Using compelling sidebars and photographs, this book ultimately gives readers a comprehensive view of the island nation in the twenty-first century.