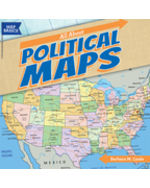 Which state is south of Maryland and north of North Carolina? How many states border California? How many countries are there in South America? As students read this book, they'll gain a better understanding of the locations of countries of the world. Using a map legend, they'll identify state and country capitals and other cities. They'll see how various landforms create natural borders. After comparing political maps of the United States at different times, students will be able to explain how the country grew. An activity concludes the book to help readers apply what they've learned.