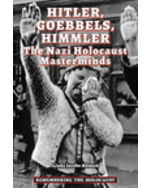 How could the Holocaust have happened in a civilized country? Who is to blame? The roots of the hatred that led to the Holocaust began long before World War II. In this work, author Linda Jacobs Altman thoroughly examines the causes and events that led up to the Holocaust, Adolf Hitler's rise to power, and the role he played in World War II in perpetuating the Holocaust. This book is developed from The Holocaust, Hitler, and Nazi Germany to allow republication of the original text into ebook, paperback, and trade editions.