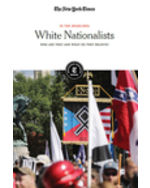 
In the Headlines: White Nationalists: Who Are They and What Do They Believe?, 1st Edition

In August of 2017, a group of torch-bearing white nationalists marched in Charlottesville, Virginia as part of the Unite the Right rally. Confronted by hundreds of counter-protesters, the gathering soon turned violent, resulting in the death of a young woman. The Charlottesville riots vaulted the presence of white nationalists to national attention. However, the white nationalist movement has been a growing force in American culture for decades. The articles in this book speak to the origins, beliefs, and growing cultural impact of white nationalists on politics, civic life, and media. Features such as media literacy terms and questions deepen readers' understanding of the reporting styles and devices used to cover the topic.