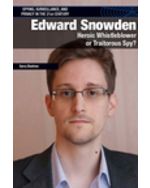 Edward Snowden worked as a subcontractor for the National Security Agency collecting information culled by domestic surveillance programs. Disturbed by the spying on US citizens, he fled to China and leaked classified documents that were published in newspapers. Living now in Russia and the subject of a 2016 film titled Snowden, he has been charged with violations of the Espionage Act. This book examines the ways the NSA spied on citizens, the moral arguments for doing so, and presents arguments about why Snowden is a hero and a traitor.