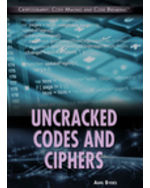 Readers examine eight codes and ciphers that could not be cracked. The ancient Phaistos Disc, circa 1700 BCE, the Voynich Manuscript with its strange illustrations from the fifteenth century, the location of the buried treasure of 1819 as described in the Beale Papers, Edward Elgar’s Dorabella Cipher of 1897, the Chaocipher of 1918, the D’Agapeyeff Challenge Cipher of 1939, the Zodiac Killer’s 408 Cipher from the late 1960s, and the Kryptos Monument ciphers of 1990 are all undeciphered today. These riddles have eluded the best cryptographers, but, with time, new tools, and a little luck, the eight codes will someday be cracked.