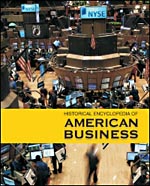 Designed and written for high school students and college undergraduates, Historical Encyclopedia of American Business offers an inviting alternative to works on economic history aimed at graduate students and scholars. The coverage of this set is carefully constructed to include almost every facet of American business history on which students would most likely seek information.The coverage in this set is broad and addresses the full breadth of American business history. There are long overviews on different sectors of the economy, such as agriculture and banking; individual industries such as advertising and electronics; and general topics as business cycles, labor strikes and outsourcing. There are also overviews on broad legal topics such as antitrust legislation, bankruptcy laws and patent laws. Also covered are significant economic depressions and "panics" as well as such events as the Boston Tea Party, the Dust Bowl of the 1930's, and the Energy crisis of 1979. Although the main thrust of this set is on broad topics and historical trends, it also offers brief biographies of 35 individual persons who have played exceptional roles in American business. These figures range from founding fathers Benjamin Franklin, Alexander Hamilton, and George Washington, to some of the giants of twenty-first century business, such as Bill Gates, Indra K. Nooyi, and Martha Stewart.