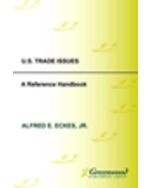 Since the negotiation of the North American Free Trade Agreement (NAFTA) and the emergence of China as a major exporter of goods and services, the trade landscape for the United States has changed dramatically -- imports have soared, factories have closed, and the United States is borrowing over $2 billion a day from foreign creditors to finance the dependence on goods from other countries.

What is the proper balance between free trade and protecting the American economy?

U.S. Trade Issues: A Reference Handbook is a timely exploration of this vital and politically sensitive question, one that emerged as a crucial issue in the 2008 presidential election. Written by a former chairman of the U.S. International Trade Commission, it provides an authoritative, accessible, and unbiased review of the defining events, principal players, and key controversies in U.S. trade policy.

U.S. Trade Issues describes American trade policies from the days of the republic to the present, focusing most intently on the post-World War II era. It explores a number of current issues, including the Doha Round of Multilateral Negotiations, NAFTA, and the president's trade authority. In addition, the handbook looks at American trade policy in the context of an increasingly globalized world economy.