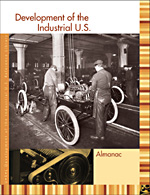 UXL's Development of the Industrial U.S. Reference Library: Almanac traces the influence of the British Industrial Revolution on America and other nations and discusses such potent forces as advances in transportation and communication, inventions that transformed manufacturing and agriculture, the growth of trade and much more.

"The inventions and innovations, business monopolies, robber barons, the Model T and the rise of collective bargaining are all part of our industrial revolution. Because the history of our revolution has its beginnings in England, the first chapter, Industrialism Takes Root in the United States, introduces students to this relationship. Other chapters include The Machine Makers, The First Factories, The Guilded Age, Railroads: the First Big Business, The Robber Barons, Urbanization, Workers in the Industrial Age, The American Labor Movement, The New South, Effects of Industrialism on Framing and Ranching in the West, Reformers Take on Industry and Industrialism in the Twentieth Century. Because this reviewer’s father worked for the Baltimore and Ohio railroad, the photograph of a locomotive, circa 1826, was especially interesting. Students interested in the history of muckraking and city political machines (a la Boss Tweed) and unionization will find an introduction here. Inset boxes offer additional vocabulary terms throughout. Your economics and U.S. history teachers will enjoy this attractive resource."--Blanche Woolls, April 2006