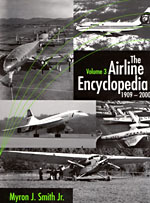 This reference work provides detailed historical and in-depth, year-by-year operational and statistical profiles of all the commercial air transport concerns extant worldwide during the past 90 years. The 6,556 entries are arranged alphabetically to facilitate ease of use.

This encyclopedia profiles all airlines including charter passenger planes, cargo airlines (major, commuter, and taxi), as well as specialized operators such as forest fire-fighting concerns, offshore helicopter services, and even pioneering airship operators like DELAG. Each profile receives individual chronological coverage, and every effort has been made to provide currency and postscripts listing name changes, mergers, and failures from late 2000 into December 2001.

If the airline is still flying, full data is provided including addresses, telephone numbers, web URLs, two-letter IATA or three-letter ICAO codes, and year founded. For the most part, company portraits are provided under the most recent airline name, as well as predecessor identity. Name, nationality and dates of operation note companies that have dissolved.

In addition to the company reviews supplied by aviation press, commercial monographs, government sources, and the general news media, data is also provided on: