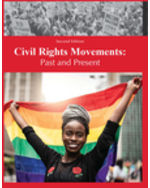 This new, two-volume set will explore the ways in which civil rights have been given, cemented, overturned, or left unrecognized, from the first uprisings to present-day 2020. In 2014, as the nation celebrated the fiftieth anniversary of the March on Washington, civil rights groups such as Black Lives Matter were organizing. Though our societal rhetoric has shifted, the struggle remains the same. Among issues discussed in this new edition: Arizona HB 2281 Limits Ethnic Studies; Flint Water Crisis; North Carolina Begins Compensating Victims of Eugenics; Unrest in Baltimore; Black Lives Matter; 2018 Voter Suppression; Million Hoodies Movement; Protests of Confederate Monuments; Mass Incarceration; and Infrastructure and Inequality.