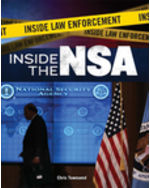 
Inside Law Enforcement: Inside the NSA, 1st Edition

The National Security Agency was founded in secrecy after World War II. Sometimes it is even jokingly called "No Such Agency" because nearly everything the agency does is kept secret. The NSA's real work came to light after Edward Snowden exposed some of its biggest secrets in 2013. This book explores the secrets of the NSA, from how it keeps Americans safe from hackers to how it collects information about us and what it does with all that data. Students will learn about the puzzles and codes that make up the biggest and least-understood agency in the American intelligence community.