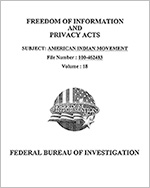 The American Indian Movement (AIM) expanded from its roots in Minnesota and broadened its radical political agenda to include a searching analysis of the nature of social injustice in America.

AIM used the media to present its message to the American public. On Thanksgiving Day 1970, AIM seized the replica of the Mayflower. In 1971, members occupied Mount Rushmore; in 1972, they took over the Bureau of Indian Affairs headquarters in Washington, D.C. In February 1973, AIM members initiated a 71-day siege at Wounded Knee, South Dakota, in response to the 1890 massacre of some 150 Lakota men, women and children by the U.S. Seventh Calvary.

The American Indian Movement and Native American Radicalism includes FBI documentation on the evolution of AIM as an organization of social protest, as well as valuable documentation on the 1973 Wounded Knee standoff. Informant reports and materials collected by the Extremist Intelligence Section of the FBI provide insight into the motives, actions, and leadership of AIM and the development of Native American radicalism.

FBI files provide detailed information on the evolution of AIM as an organization of social protest. These files cover 1969 to 1979, a period that witnessed AIM's rise to national prominence and its subsequent demise as a politically and culturally viable force. During its surveillance, the FBI developed a network of information concerning AIM's leadership, its policies, its strategies and its role in the civil rights movement and the politics of the New Left. These files offer a significant source of documentation on the intelligence and law enforcement programs of the FBI in an era of increasingly militant social activism.