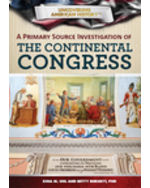 Although America's original thirteen colonies lived in peace with England for many years after their founding at Jamestown, that changed in the late eighteenth century. When England began to pass taxes and restrictions without allowing Americans a say in the matter, a rallying cry for independence called colonial lawmakers such as John Adams and Thomas Jefferson to draft a more fair and free government. The challenges faced by the Founders of the United States to create a prosperous democracy the likes of which had never been attempted before are explained in this clear, comprehensive, and stimulating guide.