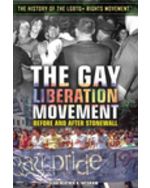 The History of the LGBTQ+ Rights Movement: The Gay Liberation Movement: Before and After Stonewall, 1st Edition

This book explains the emergence of the modern gay liberation movement, from its early years prior to the Stonewall riots of 1969 and its continuation into the 1970s. Readers will learn about the Stonewall riots, the Compton's cafeteria riot, the Gay Liberation Front, the Lavender Menace, and more. This book also discusses the contributions of important people such as Harvey Milk, Audre Lorde, and many others. The difficulties and legacies of that era will become clear to students who may know only the outline of the early history of the movement.