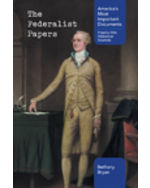 Winning the American Revolution was the first step to starting the new nation of the United States. However, without a ratified constitution, the fledgling country was not completely united. This insightful book guides readers through the eighty-five essays that make up the Federalist Papers. It explores the notions that pushed the states toward ratification and promoted a solid federal government. It takes readers through the history of why these documents were necessary and the role they played, and shares insight on how the Federalist Papers, their authors, and the U.S. Constitution itself continue to play a role in American society.