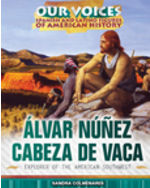 The story of Spanish explorer Alvar Nunez Cabeza de Vaca brims with his adventures and misadventures throughout the North American Southwest. As of the sixteenth century, no European had journeyed over such a large extension of territory, from the Florida Peninsula to northern Mexico, and survived. This lively and informative volume goes on to examine his eight years of wandering in this unknown land, during which he learned natural medicine from the American natives and became a curandero, learned their languages, and served as a trader and peacemaker among different tribes. Vibrant illustrations complement and expand on this memorable, but often overlooked story.