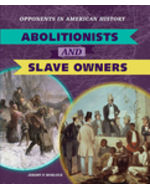 The dispute over slavery began before the founding of the United States. Abolitionists saw the ownership of one human being by another as an intolerable evil. Slave owners believed it was essential to their economy and way of life. The struggle between the two shaped the growth and government of the nation. This exciting book shares the views of key figures in their own words. Readers will learn about the many forms the debate took, from bestselling books to bloody battles. Interesting fact boxes and historical images bring the issues into clear focus for readers.