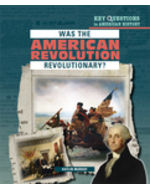 After many years of colonist uprisings, colonial Patriots finally decided to band together and fight for their independence from Great Britain. The American Revolution started off as a war between the colonists and the British Empire, but other countries eventually became involved. The war officially ended on September 3, 1783, giving the colonies their independence. In the years after the American Revolution, several other countries had revolutions, such as the French Revolution. It's important for your readers to learn that the American Revolution was certainly not the first revolution to occur in history, but it was one of the first revolutions felt throughout the world, and was indeed, entirely revolutionary.