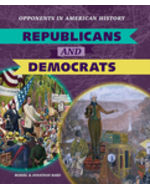 Elected officials have a duty to represent and advocate for the values of those who elected them. Most politicians align themselves with one of two political parties: Republican or Democratic. But did you know that the Republican Party used to support big government spending and the Democratic Party favored small government? In many ways, the parties we know today have completely changed sides. But why? This book explores the history of the Republican and Democratic Parties, while presenting situations in which the two disagreed and times when they put their differences aside for the sake of the nation.