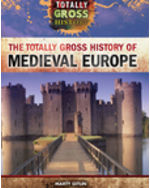 This entertaining volume reveals some of the grossest practices in hygiene, dining, fashion, and medicine of Medieval Europe. Serfs often smelled bad, and they bathed and relieved themselves in streams filled with garbage. Wealthier individuals who had bathrooms produced waste that was sent down chutes into the castle moat. Peasants and nobles commonly consumed animal parts that today we would consider less appetizing, including paws, brains, stomachs, and lungs. Poor nutrition resulted in rotting teeth and scurvy. Doctors were woefully backward in treating patients, using odd remedies such as ground-up worms, bloodletting through leeches, and spreading animal dung on wounds.