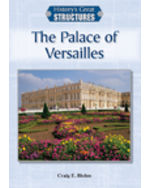 The Palace of Versailles, 1st Edition

The Palace of Versailles began as the symbol of Louis XIV's reign as absolute monarch of France. With its masterful architecture, lavish interior, and exquisite gardens, Versailles was the standard by which other palaces were measured. But the very opulence that made Versailles one of the world's greatest structures played a role in the ultimate downfall of the French monarchy.