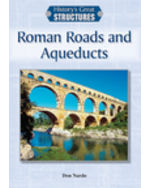 The Romans were the greatest builders of the ancient world, and among their most impressive achievements were their vast systems of roads and aqueducts. The roads, which featured inns and other amenities at intervals, carried soldiers, messengers, traders, and religious pilgrims far and wide. Meanwhile, the aqueducts brought life-giving water to cities and towns, making Rome's mighty urban civilization possible.