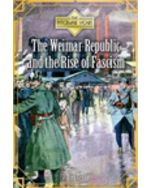 The Interwar Years: The Weimar Republic and the Rise of Fascism, 1st Edition

The Treaty of Versailles sought to punish Germany and its allies for their actions in World War I. Deemed too harsh even by some allied experts, Germany’s economy was left devastated, the repercussions of which did not sit well with the populace and instead gave rise to people and concepts that would challenge and devastate the world less than two decades later. This book delves into the political history of the Weimar Republic and the rise of Fascism, discusses how these events led to World War II, and examines their aftereffects on the world today.

Front Cover.
Title Page.
Copyright Page.
Contents.
Introduction: The Origins of the Weimar Republic.
1: The Weimar Republic.
2: The Nazis Come to Power.
3: Cultural and Social Changes in Weimar Germany.
4: The Nazis in Power.
5: Modern Fascism: The Legacy of the Nazis.
Glossary.
Chronology.
Further Information.
Selected Bibliography.
Index.
About the Author.