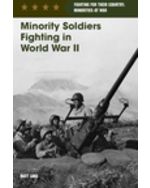 The heroism of minority soldiers during World War II is widely known: the Tuskegee Airmen are some of the most celebrated aviators in military history. Yet minority soldiers faced immense hardship during the war like racism and prejudice. This book looks at these soldiers' struggles, their triumphs, and the way that life changed for minorities after the war.