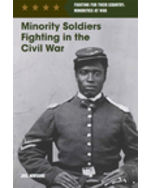 Fighting for Their Country: Minorities at War: Minority Soldiers Fighting in the Civil War, 1st Edition

The time period surrounding the Civil War was fraught with racism, the horrific conditions of slavery, and violence against freedmen. Though history remembers the war as one waged on behalf of African Americans, in reality, many African Americans participated in the conflict themselves. This book describes how African Americans fought in segregated units led by white officers, their achievements on the battle field (including sixteen Medals of Honor before war’s end), and more.