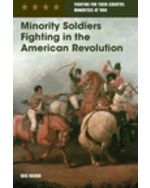 Fighting for Their Country: Minorities at War: Minority Soldiers Fighting in the American Revolution, 1st Edition

Although African Americans faced unequal treatment, racism, and even slavery in the colonial period, minority soldiers fought bravely for both the British and the Americans in the Revolutionary War. This book looks at the contributions of African American soldiers and their experiences before and after the war. The book also provides information about the war itself and two case studies that trace minority soldiers’ heroism in detail.