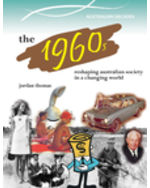 The 1960s was a decade of growing prosperity for most Australians, with full employment and improving lifestyles, but there was also war and conscription and social conflict. Australia in the 1960s was looking for change, but a government in power too long could not see what was coming. For the first time people young and old fought back against conscription and war, but we went crazy when an American President came to visit. And easy-going Australia changed forever when a Prime Minister was lost in the surf. This was the 1960s — the decade of Vietnam, National Service, Harold Holt, LBJ, jobs for all, the minerals boom, the credit squeeze, Australian governors-general, decimal currency, the Gurinji, capital punishment, miniskirts, computers and new, previously unheard-of, freedoms.