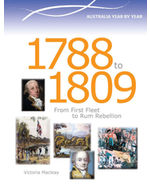 The first 22 years of the colonization of Australia were tumultuous ones. They began with the arrival of the First Fleet and ended with the aftermath of the only military insurrection Australia has ever experienced. This book covers all the major events - the arrival at Botany Bay, the settlement at Sydney Cove, the battle to survive, heroic explorations, and tensions between the new arrivals and indigenous peoples.